When John MOLONEY of Dromalty in Limerick, Ireland arrived in Sydney in 1864 on the Sirocco, he was met be the woman he was to marry in a few days (Ellen MEYRICK). As John wrote "I left Ireland for Australia in June 1864, and landed in Sydney on the 8th October 1864. On this (8th Oct 64) afternoon Ellen Meyrick and an acquaintance came on board and I went with them. I was married to Ellen Meyrick on the Tuesday following (11 October 1864) at St. Mary's (old) cathedral Father Curley officitating. Ellen Meyrick born 14th Feb 1842." (see http://thehistoryofmatt.blogspot.com/2007/11/maloney-family-or-moloney-or-malony-or.html).
Usually when I'm making a post, I place items into the post as they unfolded in my searching, however this time I'll post them in the chronological order.
John arrived under the assisted immigration program to New South Wales. The NSW State Archives information sheet on immigration (http://www.records.nsw.gov.au/state-archives/resources-for/historians/immigration/immigration) outlines that assisted immigrants were "passengers who had all or part of their passage paid for them by an agent, a private individual (often a relative), the government, or a combination of all three". This could include local parishes that raised funds to assist the poor out of their parish to the other side of the world, as was the case with my ancestors from Woodchurch, Kent (http://thehistoryofmatt.blogspot.com/2008/11/furrill-families-of-woodchurch-kent.html).
Thankfully the 'Immigration deposit journals' largely survive in NSW. "These are records of money deposited in the Colony by people wanting to sponsor the immigration of someone, usually a family member or someone for specific employment".
In the immigration deposit journals appears the entry for John Ryan MOLONEY 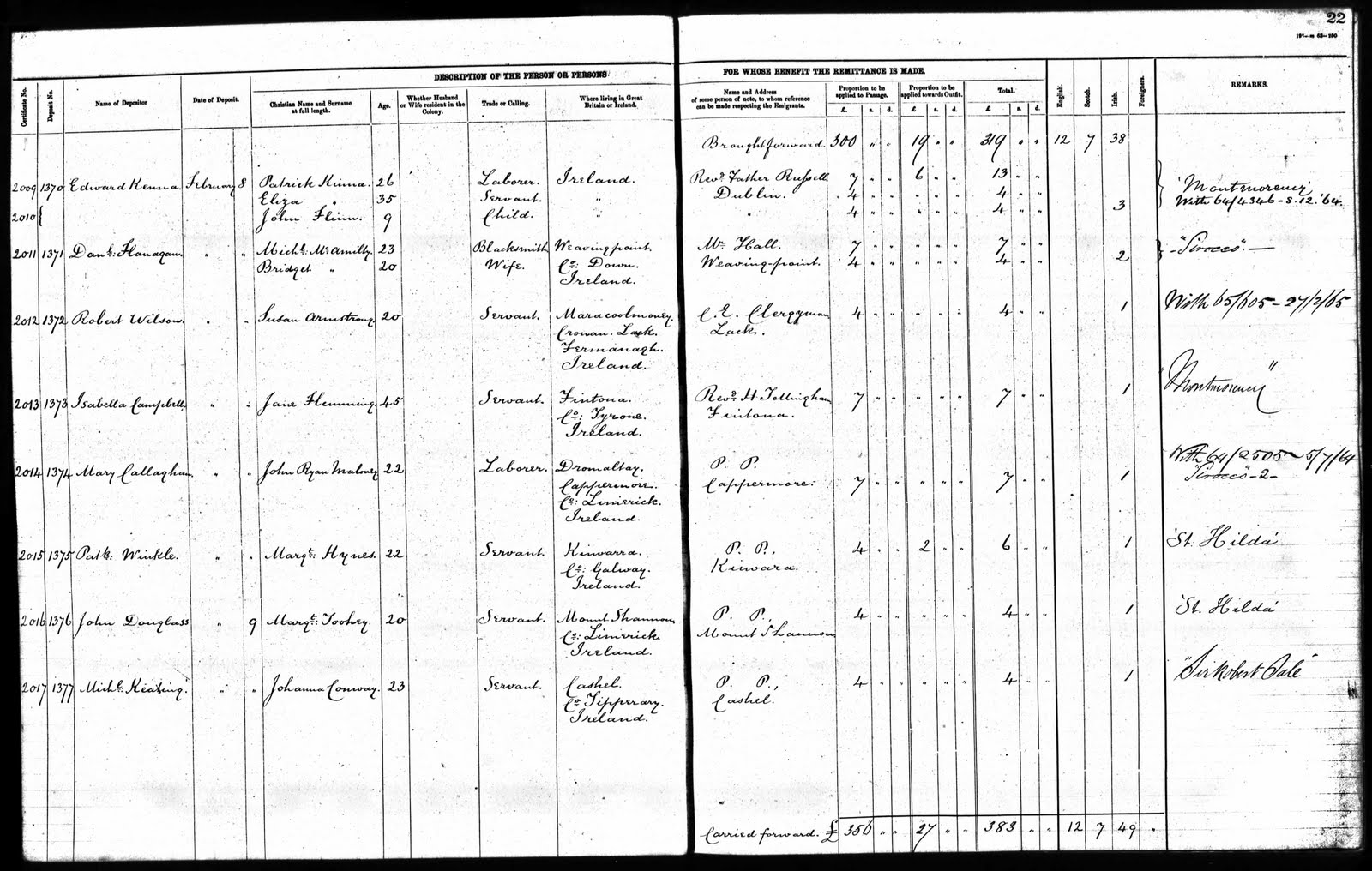 ASIDE: Quite remarkably, it should be noted that a second John Moloney from Dromalty, Limerick was sponsored and immigrated in 1864. This John Moloney arrived on the 'Sir Robert Sale', son of John and Mary Anne Moloney of Dromalty, and remarkably his passage was sponsored four days after 'our John' by Patrick Merrick, who was soon to be 'our John's brother-in-law! I haven't posted the documents here for relative brevity, but can if anyone wants to see them. I do not know the fate of this 'John of Sir Robert Sale', though given how tiny Dromalty is, it is assumed that the two are cousins.
The journal entries reliably point to the assisted immigration index for John Moloney's arrival on the 'Sirocco', which arrived in Sydney Harbour around 3 Oct 1864  with 309 'Government immigrants'.
The immigration sheets also list the information given by John on arrival. 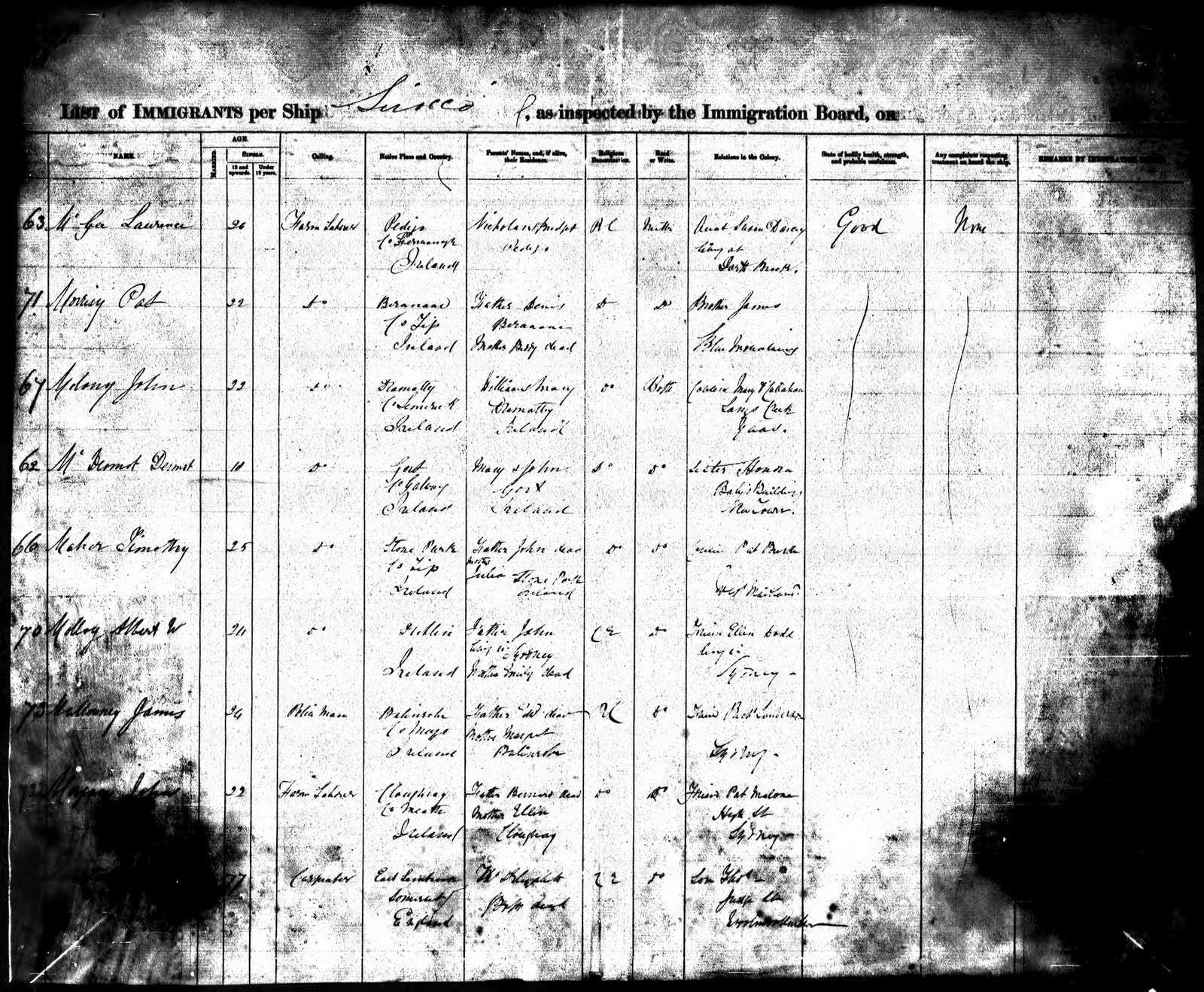 NSW Immigration index
Sirocco, October 1864
List of immigrants per ship 'Sirocco'
Name: Molony John
Age: 22
Calling: Farm labourer
Native place: Dromalty, Co Limerick, Ireland
Parents, and if alive their residence: William and Mary, Dromalty, Ireland
Religion: RC (Roman Catholic)
Read and Write: Both
Relations in the colony: Cousin Mary Callaghan, Lang Creek, Yass
The final statement here leads to the  question of the sponsor: who was John's sponsor, Mary CALLAGHAN? She states she is a cousin (from the RYAN or MOLONEY side?). Lang Creek seems elusive, but is outside Yass proper.
In searching for information on Mary Callaghan, it became clear from a single advert that John, who had married days after arriving in Sydney, had not been so prompt in contacting his sponsor:

Sydney Morning Herald
Wednesday 25 January 1865
IF THIS should meet the eye of JOHN MALONEY who arrived per ship Sirocco, about September last, his cousin, MARY CALLAGHAN, requests him to write, and would be thankful to any one giving information of where he is.
MARY CALLAGHAN, Lang's Creek, Yass
This advert confirms where Mary lives and the relationship between herself and John. Looking for possible marriages of a Moloney/Maloney to a Callaghan, the following was found in the NSW BDM archives (the Roman Catholic marriage also fits):

Some simple searches (newspapers, etc.) haven't revealed anything obvious, including that I could find no births for the above marriage. A Mary Callaghan arrived in the colony in 1841on the 'Runnymede', a native of Limerick, from Limerick (the city), daughter of James Maloney. 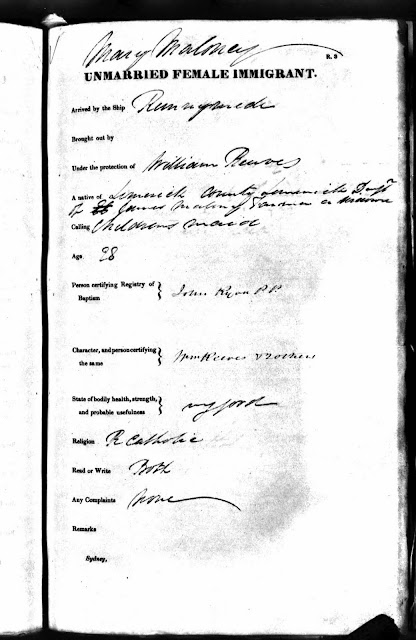 There may be other possibilities for Mary Callaghan, but none I could find among convict lists and assisted immigrants. 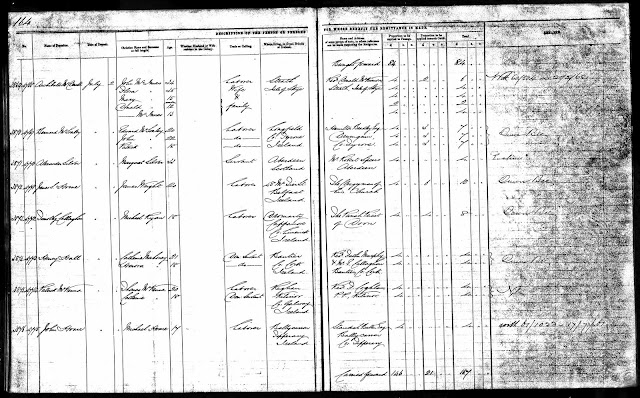 Transcript
NSW Immigration Deposit Journals
1861
Certificate No. 3873
Deposit No. 4772
Name of Depositor: Timothy Callaghan
Date of deposit: July 2 (1860)
Description of person
Name: Michael Ryan
Age: 18 (born abt 1842)
Trade: Laborer
Where living: Dromalty, Cappamore, Co Limerick, Ireland
Reference: The Parish Priest of Doon
Proportion of be applied to the passage: 4 pounds (currency)
Proportion to be applied towards outfit: 4 pounds (currency)
Remarks: "Queen Bee"
And sure enough in March of 1861 a Michael Ryan arrived on the 'Queen Bee' a native of Towerhill,Limerick (a townland adjacent to Dromalty, and where John Moloney's wife Ellen MEYRICK was from).
What was the fate of Timothy and Mary? The appear to have stayed in the Lang's Creek district near Yass. I did find a headstone transcript for Booroowa Cemetery:
Callaghan Timothy, County Cork, Ireland, died Lang's Creek near Burrowa 5.1.1873 aged 60 years.
The corresponding death certificate registration was found:
3604/1873 CALLAGHAN, TIMOTHY, f: TIMOTHY, M: BRIDGET, BURROWA
This would make Timothy born about 1813. There was also a death announcement for a Mary Callaghan in the Yass Courier:
DEATHS YASS COURIER NSW FROM 1857-1905
Yass Courier 5.11.1895. Callaghan Mary died in goal on Saturday morning aged 70-80 years, death was hastened by the want of nourishment, goaled for medical treatment, been in the Colony since 1843 came to Yass aged 27 years.

The corresponding NSW death registration had no family information, but if Mary and Timothy had no children there may have been no-one knowing the answer those questions.
NSW BDM
14917/1895 CALLAGHAN MARY, f: UNKNOWN, m:UNKNOWN, YASS


Whether or not John ever managed to meet up with a cousin is not known of course. Based on the evidence I above I feel that John's cousin was born abt 1813 as Mary Moloney, daughter of James Moloney.
Posted by Matt Hall at 8:07 AM

Do you know if John Moloney had a sıster Maryann who marrıed John Joseph Moloney of Drombanna Limerick.
E-Maıl add jennyomer@live.com