At the limits of my family tree for the CONLON line is Malachi Conlon, and his wife Mary O'Brien. I know of them thanks to the death certificate of Patrick CONLON (1793-1870). Patrick came to Australia with his own family as a member of the 50th Regiment of Foot in the early 1830s, and stayed. Patrick's death notice in the SMH stated him to have lived at 52 Parramatta Street, and be a native of 'Kinvara, Galway, Ireland'.

So then, all I know about Malachi CONLON and Mary nee O'BRIEN is that they lived in Kinvara, Galway, Ireland, and I can infer based on family behaviour in NSW that Malachi and Mary were likely Catholic. There are Catholic registers for Irish parishes available at the National Library of Ireland (http://www.nli.ie), and very little else available for digging into records back in Ireland.

Looking at the Kinvara parish entry coverage on the NLI site, they effectively begin just before Patrick and family reached Australia (1833). It notes that microfilm 02442/14 contains a 'list of inhabitants showing Christmas dues 1834, Easter dues 1835', and reading through the list I found, scratched out, Malachy Conlan listed as being of 'Cahernamadra', which in modern times is written as 'Carrownamaddra', and lies less than a mile west of the town of Kinvarra, and all within the parish. 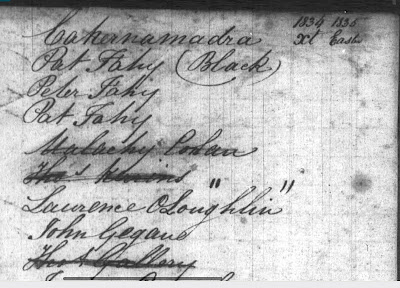 While burial records do not appear to have survived for Kinvarra, it is possible that Malachy was crossed about because he either died, or moved to another part of the parish.

The son Patrick Conlon was born about 1793; this is inferred from his stated age of 77 at death in 1870, and may be incorrect (I suspect he was actually younger). It would be useful to see the 50th Regiment of Foot records as it may reveal Patrick's true age. At any rate, this would mean that Malachi was born in 1770 at the latest, meaning he was 54 or older when the list was made in the parish records.

One other occurrence of Malachy in the records is the Griffith's valuation records for Galway of 1856-ish (http://www.askaboutireland.ie/griffith-valuation/). There is listed a Malachy Connellan in Kinvarra, a house on land of nearly 4 acres, the house being of slightly below-average value for the area (and presumably quality).

It might appear that this Malachy would be too old, BUT in the 1867 civil registration indexes, the death of a Malachy Conlan is recorded, registered in Gort (the registration district that captures Kinvara). His age was recorded as 85, making him born about 1782 (Returns Quarter 2, Returns Volume No 9, Returns Page No 207). It would be quite remarkable, but it's possible this is the death of Malachy Conlon/Conlan/Connellan ; I hope to track down the certificate, but in the meantime I hope this post catches someone else's interest.

Also, there is another CONLON connection in the records (including the same list of inhabitants shown above); though not one I've been able to prove that the family maintained. In the parish records and assisted immigration records to NSW is the family of a John Conlan of Kinvara, many of whom came to Australia in the late 1850s (after the potato famine).
Posted by Matt Hall at 3:33 PM

There is also a Malachi Conlon in 1858 Griffiths evaluation living in Sligo. I guess the name is not as uncommon as I thought

Hi Matt, I’ve been enjoying your blog this morning, courtesy of Jill Ball’s GeniAus’ Gems. Do you know, if you have access to a fax machine and a credit card and send a request the General Register Office in Roscommon, for €4, they will email you a copy of the death register, and usually within a week? You just need to provide them with the index details mentioned in your post.