The children of William and Eliza HALL - Yass, NSW - Version 7

This is the seventh version of this post, updated with new information. I have headstone photos of 11 of 15 siblings, and confirmation that at least 2 others don't have a headstone. I have now added photos of the HALL children I've been able to source for the first time.

Occasionally I find my posts act as fishing expeditions to find common descendants. Google brings those looking for an ancestor to my blog, and thankfully in contact with me. If posts are fishing exercises, then this post is a big hook. It lists the fundamental facts about the issue of William HALL and Eliza BLISS of Yass, NSW. William came to Australia from England with his parents Samuel HALL and Mary Anne nee WELLS - as outlined elsewhere (http://thehistoryofmatt.blogspot.com/2009/04/samuel-hall-headstone-yass-nsw.html).

William and Eliza had 15 children together from 1868-1896, all registered in Yass, NSW. William's death certificate in 1912 (informed by one of his children) lists only 13 children (11 living, 2 dead) but there were another 2 living children that were missed (http://thehistoryofmatt.blogspot.com/2010/03/death-certificate-of-william-hall-1843.html).

In initially putting together this list I  benefited greatly from the work of my grandfather's brother, Francis 'Frank' Michael HALL (1923-2005). While the HALL children below were born from 1868-1896, many of THEIR offspring (the grandchildren) were born after the 1918 cut-off for publicly available birth records in NSW, so in some cases all I know comes from Frank's notes - information passed to him by the living children and grandchildren of William HALL that Frank drove all over NSW meeting.

While all William and Eliza's children were born in Yass, they moved with their younger children to Koorwatha about 1900-1903 and so the elder children married in Yass, the younger ones in the Koorawatha area (90 miles away). It has been suggested that this was precipitated by the droughts that ravaged Yass around this time, that possibly financially crippled the family's farming activities.

It appears that the family were not all in close contact. When my great grandfather Norman HALL (son of Afred E HALL, #2 below) wrote up a family tree, he 'thought' his grandfather's name might be William (true), but more than this he did not know. He sketched out the names of six of his aunts/uncles but the remainder he was not aware of. This may just be a reflection of the fact my great grandfather Alfred E HALL left home when he was about 15 - he only met his youngest sister for the first time when she was 16, and he over 40! It may also be that conversion to Catholicism by a number of the siblings (including Alfred E) distanced them a little from the C of E (Protestant) family.

1. Mary Ann HALL (1868-1909). Born Yass, NSW 1868. Married Frederick COSTELLO in the nearby Goulburn district in 1895. They had six children around Goulburn and Yass, and a seventh child in the Narromine district in 1907. One daughter, Amelia Alice 'Millie' COSTELLO was burnt to death in 1908 (registered in the Warren district of NSW). The Registers of Coroners' Inquests shows that at the inquest on 6 Jul 1908 held at the Court House in Warren NSW shows that she 4 years 10 month old and was born at Bowning NSW (outside Yass) and died at 'Egelabra, Warren' as a result of 'Effect of burns accidentally received' - apparently it is still a large wool property.

Mary Ann drowned there a year later (1909) aged 40. She apparently blamed herself for not smothering the flames engulfing Millie (from Frank HALL's notes). Her own inquest, also held at Warren, concluded that she died of 'Suffocation by drowning her own act while temporarily insane'. I have not yet ascertained where she and her daughter were buried, and whether a headstone exists.

Frederick COSTELLO re-married to Jessie M BROWN in Granville (western Sydney) in 1911 and they lived in Lidcombe for a time - Frederick served in the First World War. Jessie died in Queensland in 1942, and Frederick married a third time to Frances DRINNER in 1946. Frederick died in 1956 and is buried in Bundaberg Cemetery (QLD). 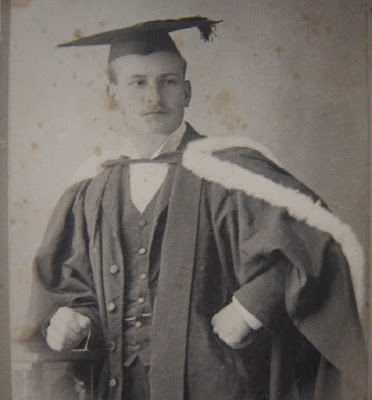 Photo of Alfred Ernest HALL, probably when graduating from the University if Sydney in 1893.

James died on 17 Mar 1955, and Lovina Jane on 4 Feb 1969 (registered in Sydney). They are buried together at Bulli General Cemetery. 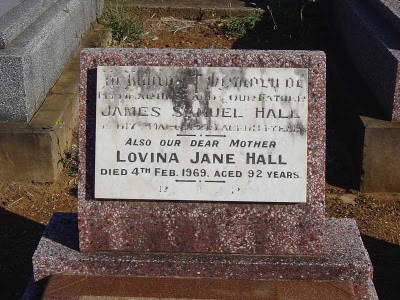 4. Edward HALL (1874-1952). Born Yass, NSW 1874. He was the informant on his father's death certificate living at Koorawatha, NSW in 1912. He was a surveyor and travelled through western NSW as a young man. Around 1908 he moved to Koorawatha (where his parents lived) and operated a general store (E. Hall & Co) in Boorowa St Koorawatha. In 1912 he was charged and found guilty of 'uttering' orders, and sentenced to six month's hard labour in Goulburn Gaol. Aged 40, Edward was bald with brown hair at the sides, a thick beard, was 5' 8" tall. He never married and died 21 Mar 1952, probably in Koorawatha. Edward's estate was left to two nieces, Margaret BOYD nee WATKINS (daughter of #8 Sarah) of Koorawatha and Mary MCQUILLAN nee HALL (daughter of #13 Cyril) of Bass Hill in Sydney. I have not confirmed where Edward was buried and whether or not Edward has a gravestone. 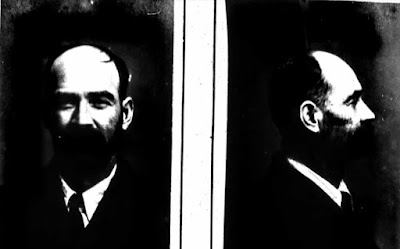 Photo of Edward HALL in 1912, from his Gaol Description and Entrance Books. 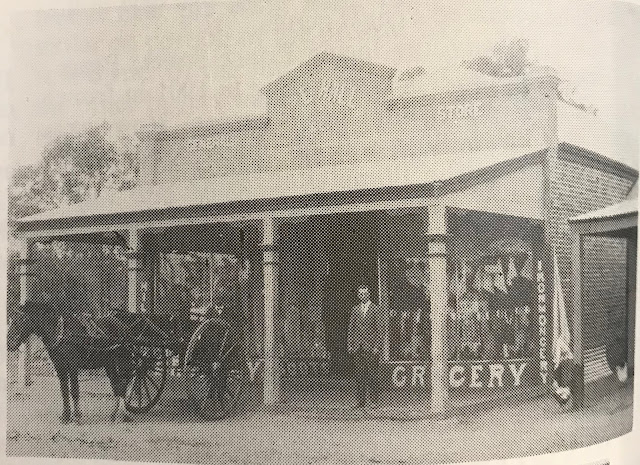 Photo of E. Hall General Store (presumably with Edward standing at front), scanned from the book 'Chronicles of Koorawatha, Celebrating 100 Years of Public Education in Koorawatha' (published about 1984).

The photos below taken in 2010 by Kate Roloff show flowers at the grave. 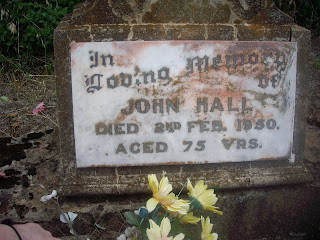 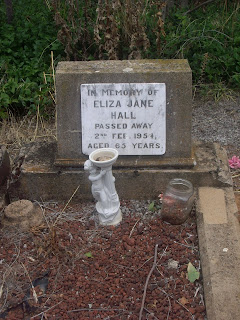 6. Arthur HALL (1877-1899). He accidentally shot himself while 'rabbiting' near Devils Pass (adjacent to the family property at Yass River).


Sydney Morning Herald
Saturday 18 Feb 1899
SAD SHOOTING ACCIDENT
YASS, Friday. A sad accident happened this afternoon on the
Yass River about seven miles from Yass. A young
man named Arthur Hall, a son of Mr. William Hall,
farmer, started out about 2 o'clock in order to indulge
in wallaby shooting. Before he got out of
sight of his house he had to crawl through a fence.
After he had done so he was dragging the rifle
through after him, when it went off. The bullet
entered behind one ear and passed out at the top of
his head. His brother saw him fall, and on running
to him found him dead.

He was not married. He is buried next to his grandfather Samuel HALL in Yass Church of England cemetery. 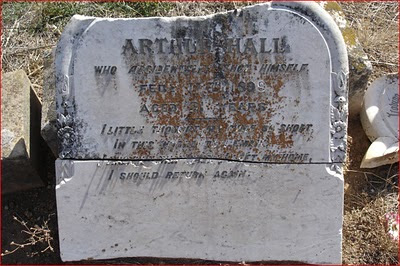 In Loving Remembrance
Arthur Hall
Who Accidentally Shot Himself
Feb17th 1899
Aged 21 Years
I little thought my time so short,
In this world to remain
I {thought?} when I left my home
I should return again

Thomas died at Orange in 1961, and his wife Margaret Ann in 1968 also at Orange, and they are buried at Orange cemetery in the Catholic section, suggesting that Thomas converted to Catholicism like his brothers Alfred and Cyril, and sister Martha. 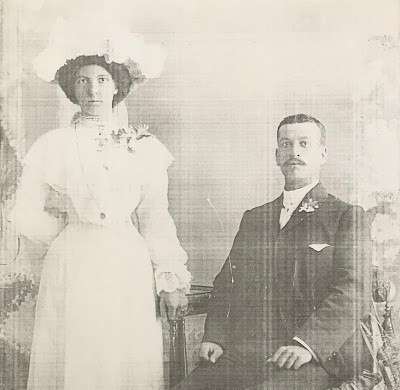 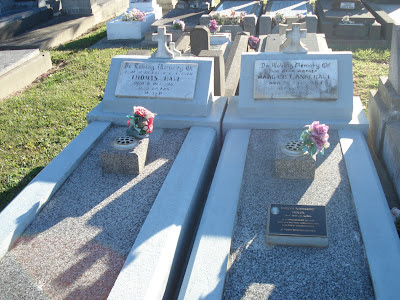 Attached is a plaque: 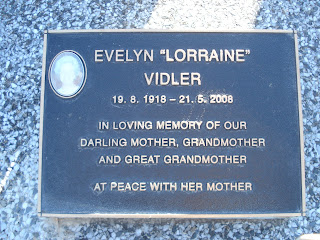 Evelyn "Lorraine" Vidler
19.8.1918 - 21.5.2008
In loving memory of our
darling mother, grandmother and great grandmother
At peace with her mother

Richard died in 1943, and his will indicates their property included a horse and dray and four acres of land. Sarah died in Koorawatha in 1946, and is in an unmarked grave at Koorawatha cemetery (no headstone at grave). Her daughter Margaret BOYD apparently had a simple wooden cross in the same cemetery.

After Catherine died, her son Arthur ran the property - but it had been sold by 1987. According to Frank Hall, in 1987 Claude was at Lightning Ridge (previously he worked at Burrunjuck Dam), and John with wife Millie ran a home, Warmington Lodge, Rossi St, Yass. I believe my grandfather visited the RYAN property in the 1930s, so there was some enduring family connection there. 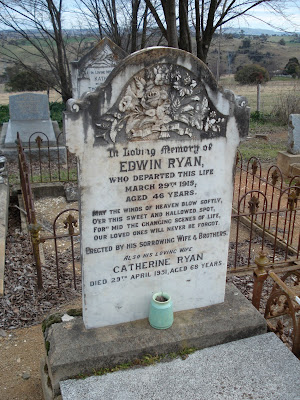 Headstone of Edwin RYAN and Catherine (nee HALL)
Yass Cemetery, C of E Section
In Loving Memory of
EDWIN RYAN
March 29th 1915
Aged 46 Years
May the winds of heaven blow softly,
O'er this sweet and hallowed spot
For mid the changing scenes of life,
Our loved ones will not be forgot.
Erected by his sorrowing wife & brothers
Also his loving wife
CATHERINE RYAN
Died 29th April 1951, Aged 68 Years


The Sydney Morning Herald
Friday 11 April 1930
WOMAN KILLED BY MOTOR CAR
A middle-aged woman, believed to be Martha Fahey, of Summer Hill, was knocked down and killed by a motor car while crossing Parramatta-road late last night.

Martha was buried at Rookwood cemetery in the Catholic section (Mortuary Mortuary 2, Area 10, Grave 2049), suggesting she had converted to Catholicism (like some of her siblings, and FAHEY is an Irish Catholic surname). Based on electoral rolls and Sands directories, it is possible that Martha and James were living separately. Martha's will, made out in 1921, left her entire estate to Thomas Savage of Concord West.

I have been unable to determine the origins or fate of James FAHEY. 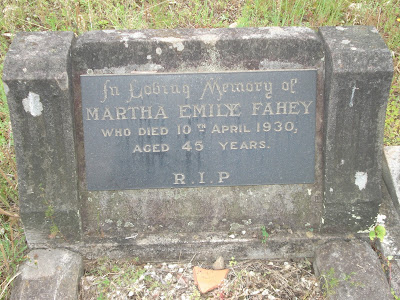 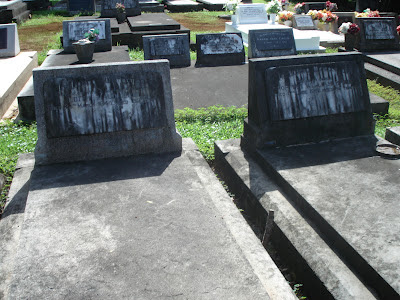 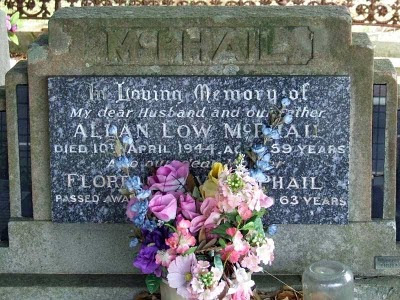 In the 1943 NSW Electoral Roll Cyril and Margaret were living in Koorawatha, Cyril a labourer. Cyril died of Parkinson's disease in 1948, and Margaret died in 1951, both buried in the R.C. section of Koorawatha cemetery. 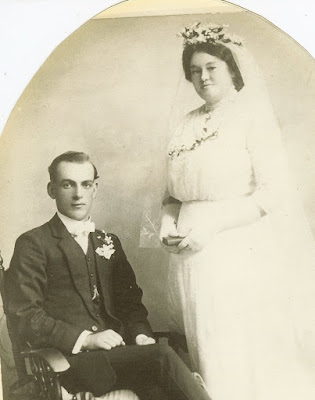 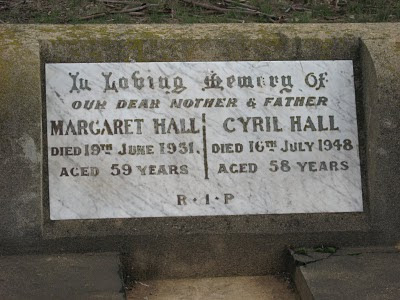 14.Walter Henry HALL (1893-1950). Born Yass, NSW 1891. Enlisted in Australian Infantry Forces in early 1916, he served in the 45th Battalion AIF. His enlistment records show he'd previously failed the entry test for the Australian Light Horse, and he gave his mother as his next of kin (Mrs Eliza Hall, Koorawatha). Enlistment also reveals he was 5' 8" tall, dark complexion, grey eyes and dark brown hair. He was assigned to B Company of the 45th Battalion AIF. He was wounded in France, shot in the leg that resulted in a fractured femur, and returned to Australia in 1918. This injury resulted in a limp for the rest of his life. Whilst in Britain he sent a portrait photograph of himself to his brother Thomas and sister-in-law (see below).

Walter lived most of his life in Koorawatha,  at one time he was a postman. He married Marjorie A DONGES (1902 Young - 1930 Young) in 1928 - she died in child-birth leaving a daughter Maureen who was apparently placed in State care and I have not been able to ascertain her fate. In the 1980s Frank Hall stated that so far as he could tell she was still alive. Walter died at Concord Repatriation Hospital (in Sydney) in 1951 after finally losing his leg, and is buried at Rookwood Cemetery, Anglican Section (Section 16, Grave No. 0003673). Andrew Hall noted that his headstone appeared to be relatively new, and was probably installed by the War Graves Commission. 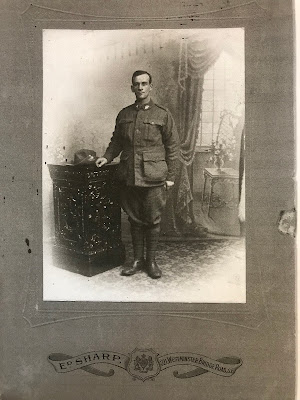 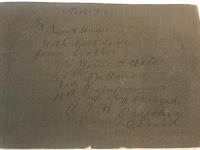 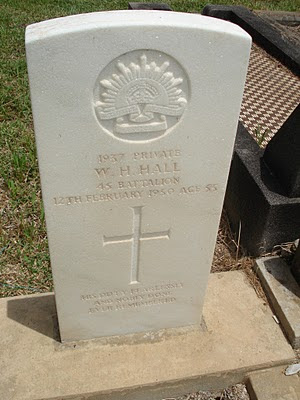 15. Ethel May HALL (1896-1967). Born Yass, NSW 1896. Married Joseph William HODGES (1897 Dubbo - 1983 NSW) at Lithgow in 1918. Joseph William 'Bill' had enlisted in the AIF during WW1 but did not serve overseas. He was a pastry cook who ran bakeries in several towns including Harden and Moss Vale. Ethel was petite, and Bill a fine violinist who played at local dances in Koorawatha and surrounds.

They had five children: Joyce (married John Thomas SCHUBERTH in 1943 at Murrumburrah), Gloria (married Maurice MCNALLY in 1954 in Sydney), Betty, Paul (married and had children but nothing further known, see headstone below), and Jill (married Kevin BRYANT 1858). Joyce owned a photo of Eliza HALL nee BLISS. 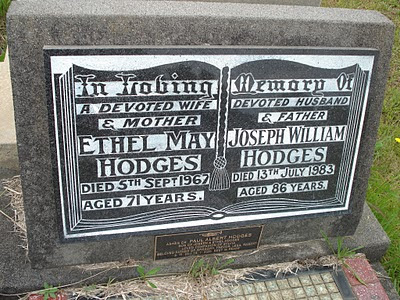 
Attached is a plaque: 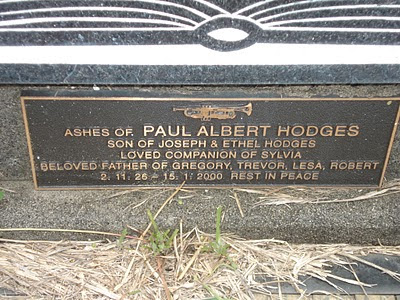 It would be great to make contact with descendants and exchange information - please contact me if you are part of the family!!
Posted by Matt Hall at 8:41 PM